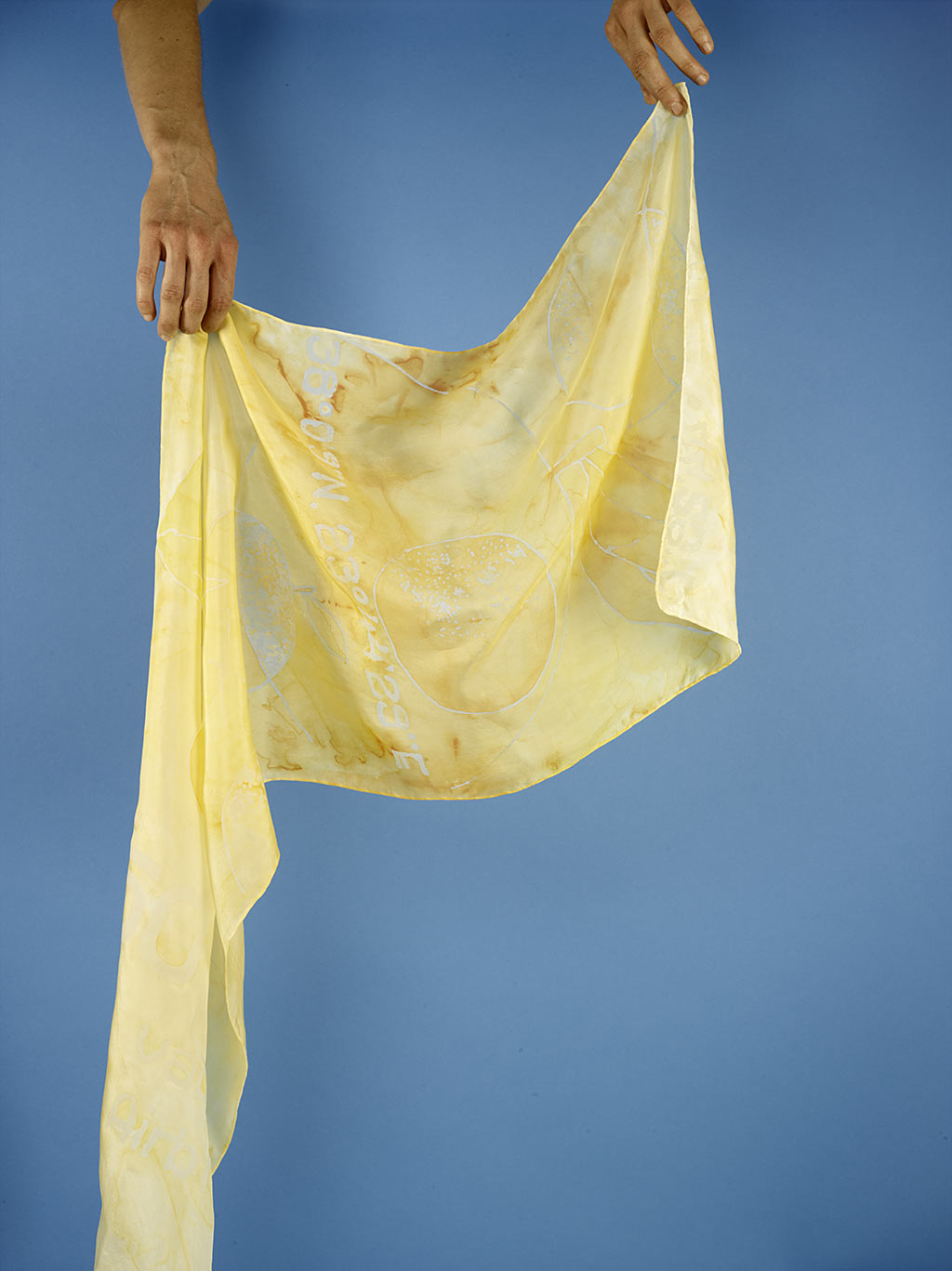 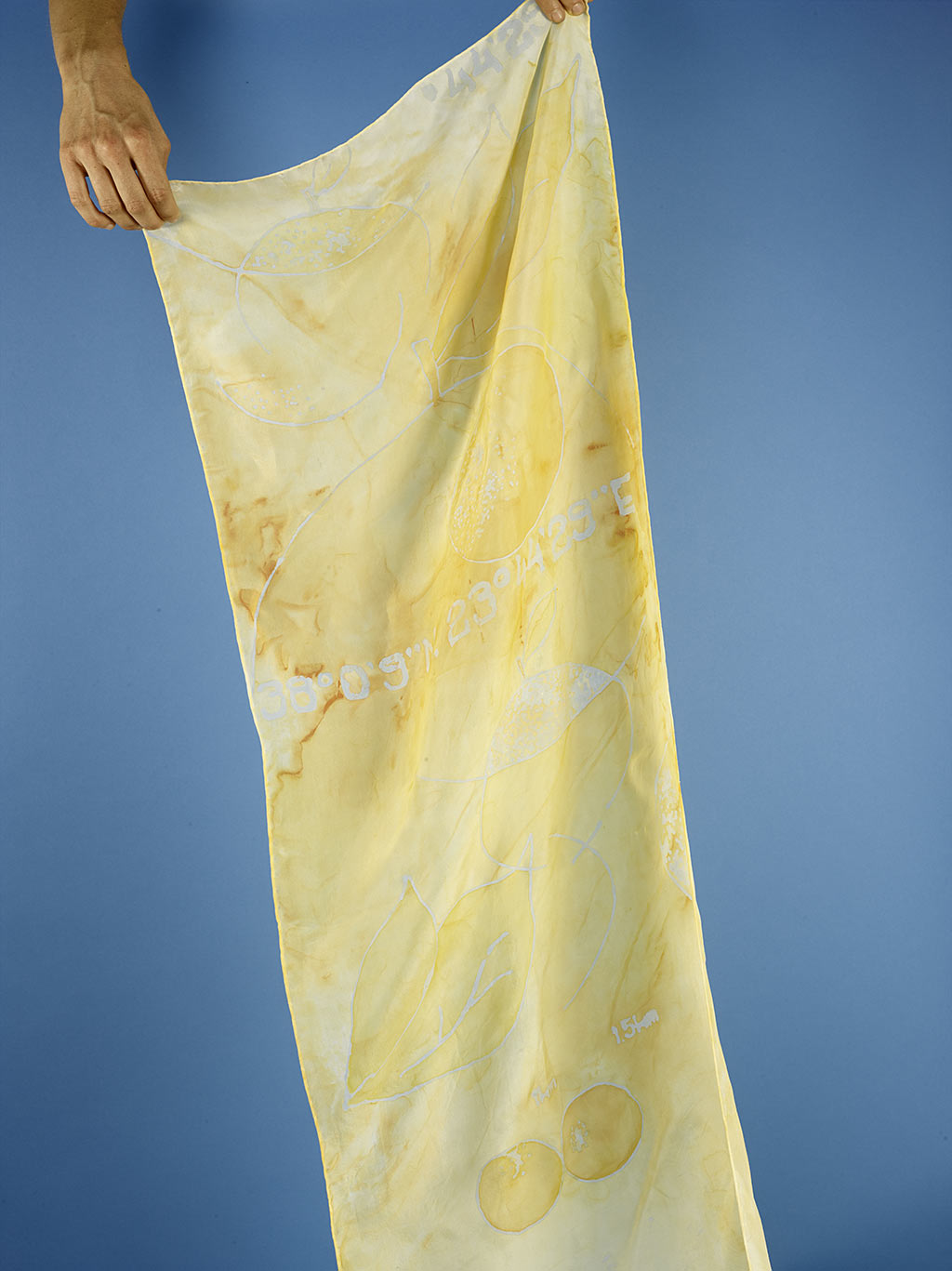 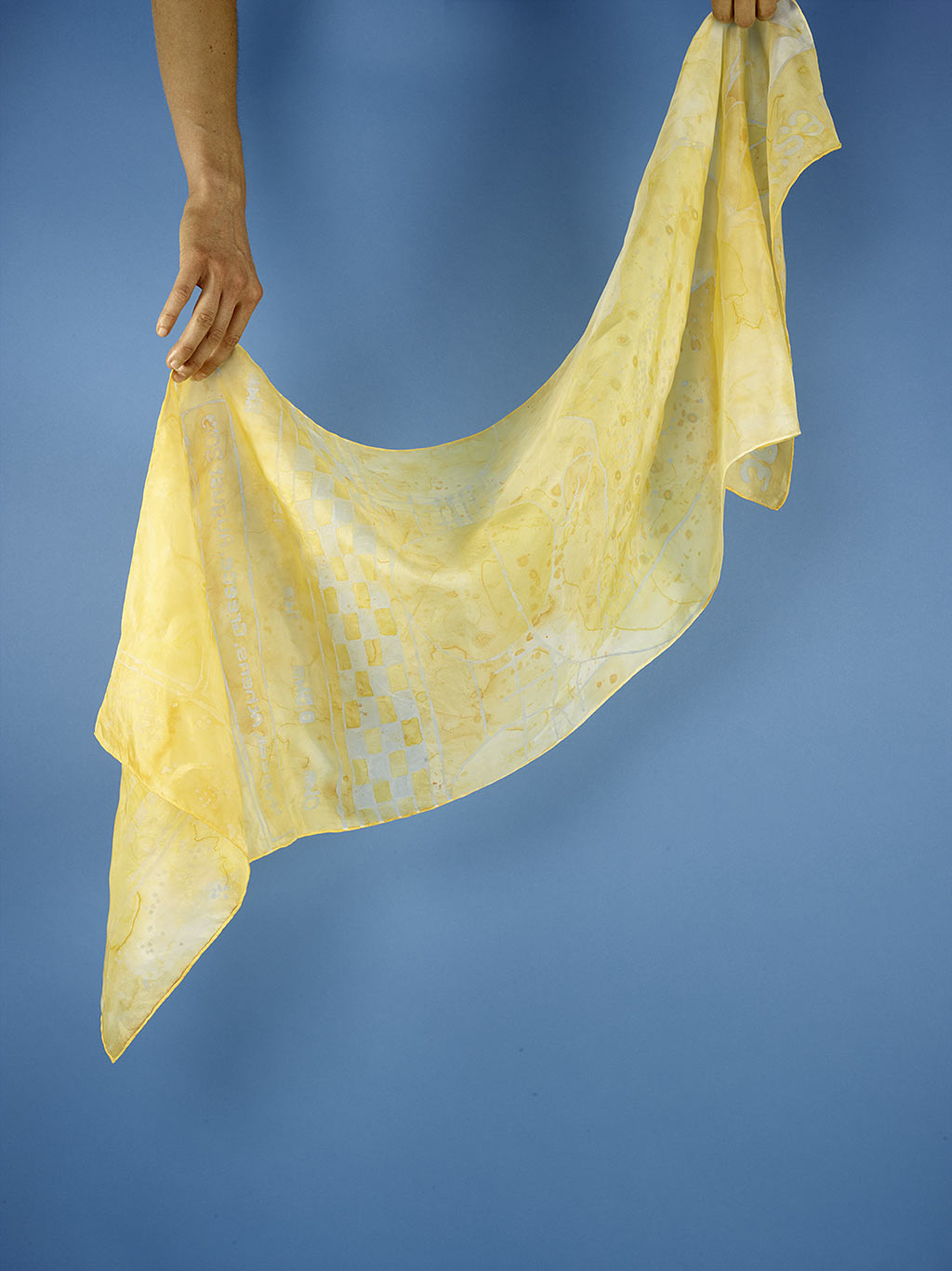 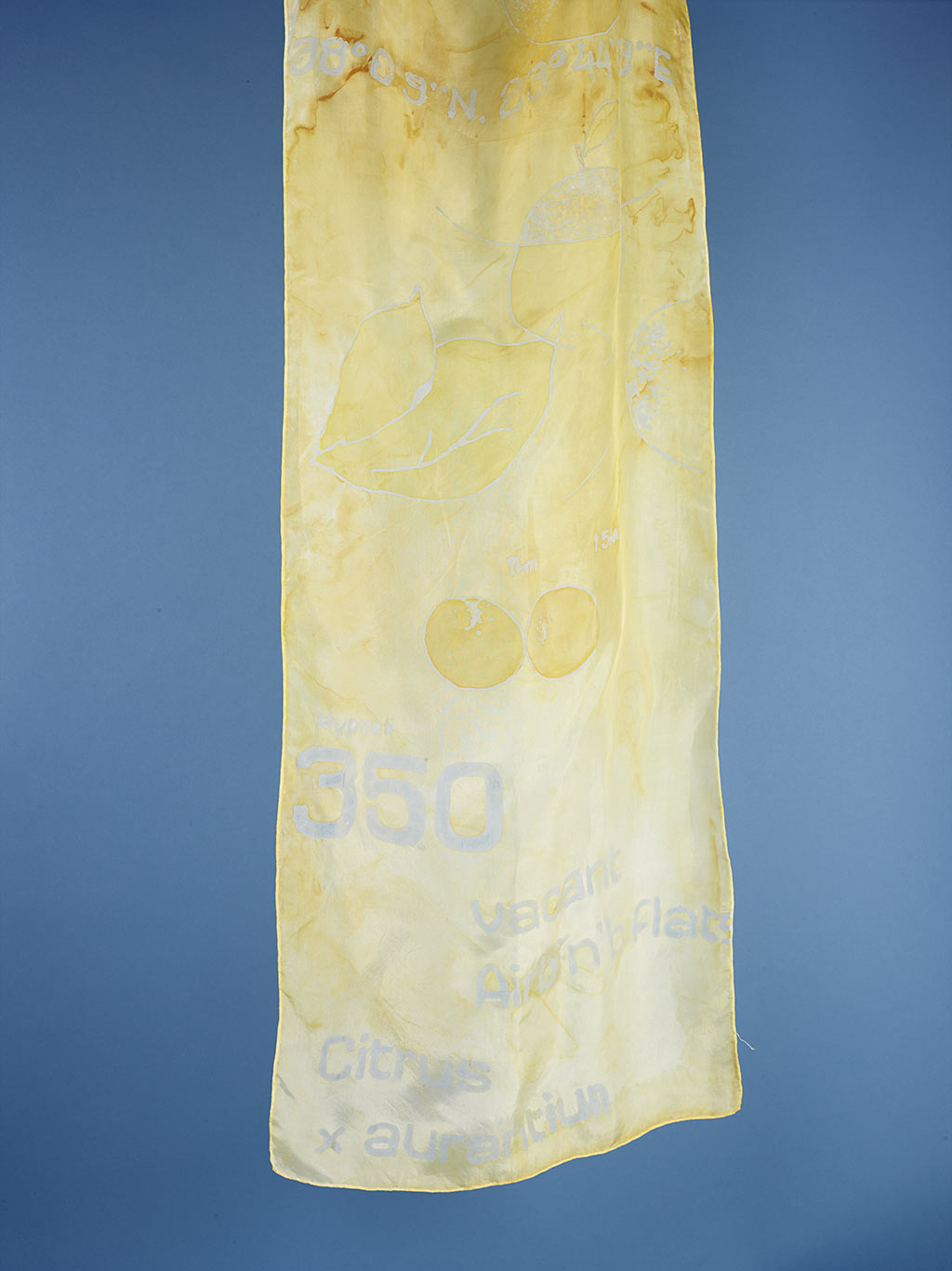 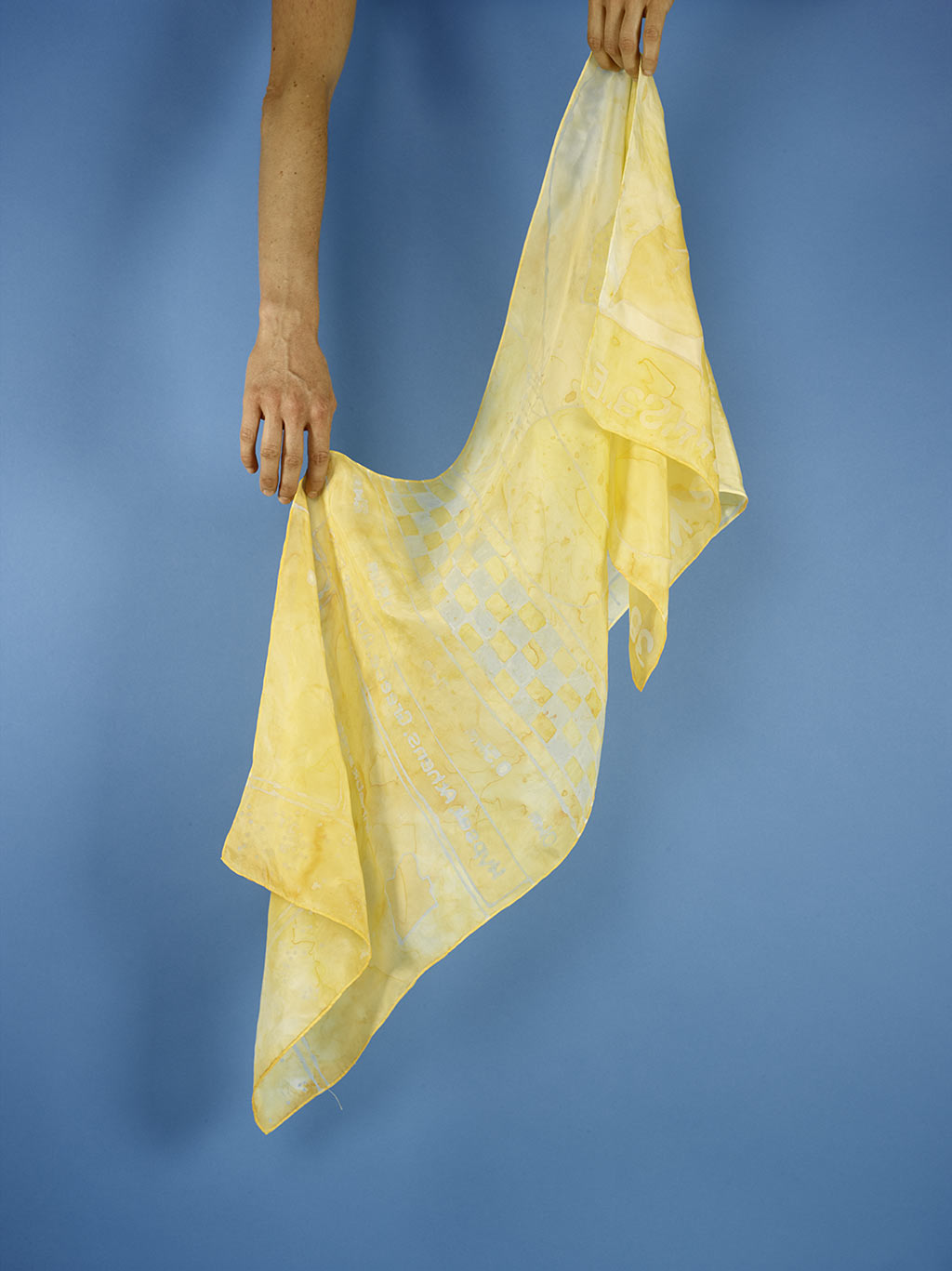 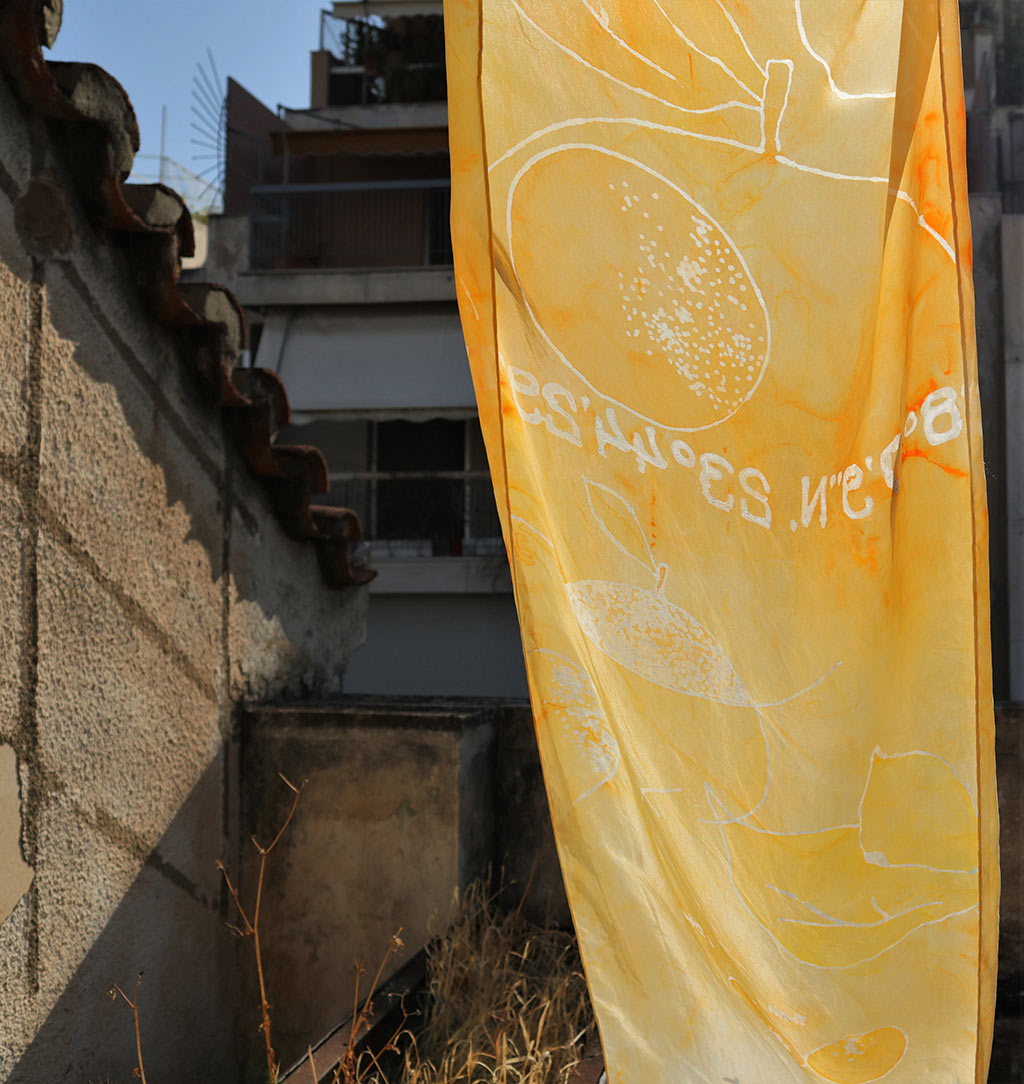 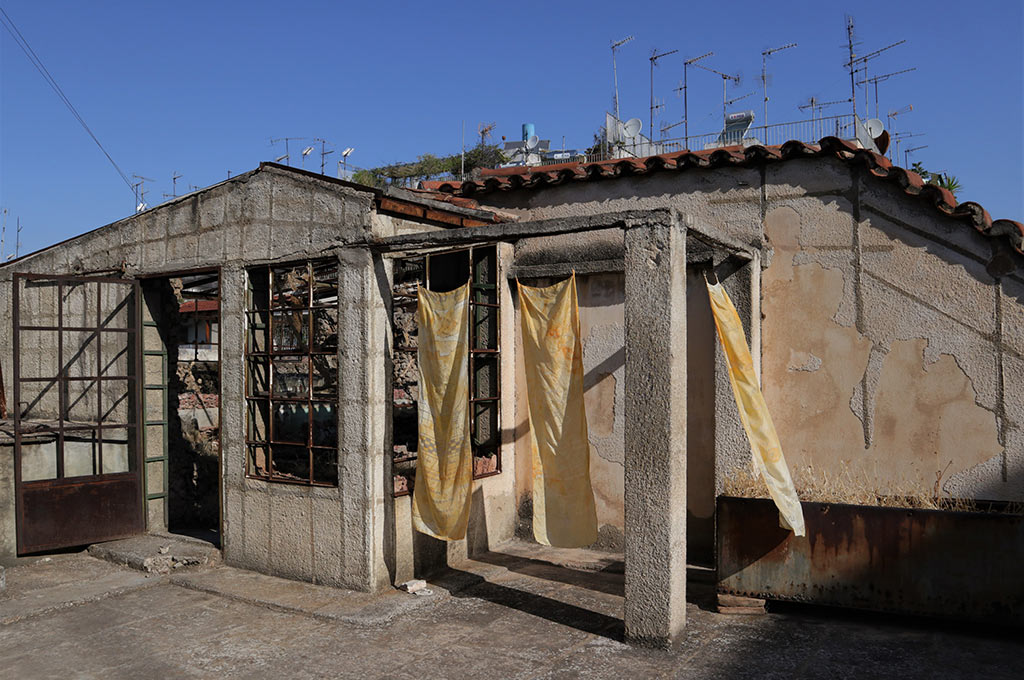 I’ve got you under my skin_Wind me up and watch me spin, consists of fragments of a symbolic mapping of Kypseli related to the booming number of available Airbnb apartments (around 300 as of September 2019). At the same time, the artist’s attention is caught by the number of bitter orange trees (Citrus × aurantium subsp. amara) that populate the streets of Kypseli and were brought from Asia for decorative –and not eating– purposes in the 19th century by Queen Amalia of Oldenburg, wife of King Otto. Linking metaphorically these two incomers, Noemi Niederhauser produces three silk map-scarfs, which have been naturally dyed with the skin and juice of bitter orange. Toying with conceptual constraints revolving around the area’s human and non-human ecology, the artist brings together the two elements and interrogates under which circumstances the new skin of Kypseli (that is now Airbnb) is here to blossom or leave us with a bitter aftertaste.

The third edition of [un]known destinations returns to the former Zarifi residence in Kypseli, Athens, where the series of these exhibitions began in 2017. This time, the show negotiates the concept of reconnection. Receiving its inspiration from the terminology of energy healing in holistic medicine –also known as Reconnection or Reconnective Healing– whose aim is to re-establish the fulfillment of being through an esoteric and outer equilibrium and harmony in corporeal, emotional and spiritual levels, the show will investigates those parameters that embrace aspects of our own existence and its ability to activate self healing mechanisms.

The Kypseli district is characterised by an immense building stock of a certain architectural caliber that became the victim of the socioeconomic and cultural crisis that hit Greece during the past decades. This includes, amongst others, outstanding examples of urban architecture that were once associated with individuals and events of significant historical and social status. Part of these buildings continue to disintegrate throughout the merciless ruinous passage of time, following their abandonment not only by their financially strapped owners but also by the state itself. At the same time, the invasion of foreign investors ravenously acquiring anything that is up for sale in the name of the Greek Golden Visa Scheme or of Airbnb, resulted to a rapid re-transformation of the indigenous social fabric that had already undergone a phase of radical restructuring back in the 90s. The current alteration occurs with the influx of a new population of owners and short-stay tenants on one hand, and the displacement of the existing population that is forced to move out on the other. The fast renovations with the utilisation of inexpensive materials lead to the downgrading of interior design aesthetics and, consequently, to the gradual negation of the area’s original character and attractiveness, the corrosion of memory and identity but also the surfacing of a new unprecedented standardisation and crudeness.

The 1924 building of the former Zarifi residence still resists against those external hostile forces. It is a starting point of a process of reconnection between the past and the present, between those people who once lived here with those who live now so the latter can learn what preceded them, between the inactive building structures and the immediate urban environment and their counterparts, between the current present with the next episode of Kypseli about to commence.

The artists exhibiting at the former Zarifi residence whose multi-disciplinary practice involves, amongst others, the mediums of textile and fiber in a both literal and metaphorical sense are invited to present with their visual vocabulary site-specific and context-responsive works aligned with the concept of this exhibition. The viewer is confronted with a conflicting condition of a contemporary dystopia while, simultaneously,becoming part and partaker of a reconnection trajectory. He is left to decide whether to leave the show with a vision of self-healing and restoration or not.

For the first time, the exhibition at the Zarifi residence expands throughout Kypseli, engaging other locations within the immediate vicinity. Four additional satellite venues generate a noetic thread, interlinking all together and re-introducing them all back on the same map as fragments of a bygone era. The curatorial aim of the third edition of [un]known destinations embraces the ability to re-adjust to new conditions of cohabitation and life in Kypseli, not just through the visual vocabulary of all participating artists but also through the exploration of the area depending on the relationship each of the viewers may or may not have with the neighbourhood. The selection process of all venues is not coincidental. They are all scattered between the Southwest border of Kypseli reaching up to Kypseli square. There are no specific routes or a proposed itinerary of how the venues should be visited. Viewers can choose any route to navigate themselves within the urban habitat; they can explore Kypseli by following different paths and therefore visit all venues either on the same day or in installments. This determines the level of experience which may range from a simple exhibition viewing to a more enhanced interaction with the humanscape and cityscape of Kypseli.

Employing a diverse range of mediums and materials, the artists respond to the former Zarifi residence with questions investigating what happens in Kypseli, post Kypseli filtered through parameters of historical relevance, cultural evolution, symbiosis and reconnection. The works on display convey notions of disruption, destabilisation and recalibration taking into account all different angles of change and its gravitas as we see and decipher it today.